An exercise in accounts 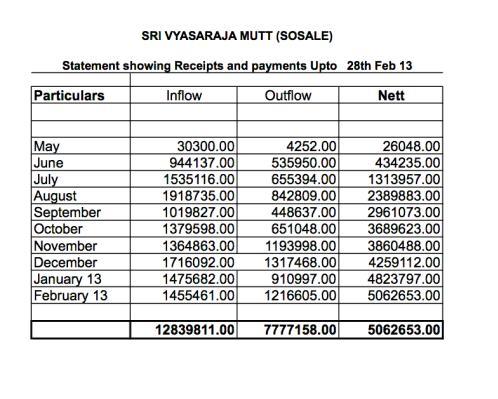 Published by admin on Sat, 03/09/2013 - 14:20
This is the income-expenditure chart put out by the Administrator of the Vyasaraja Matha (Sosale). The administrator, K. Jairaj, and the team of officials, say that all the income and expenditure of the matha from all its properties and daily offerings have been entered into account books and audited.
The matha is now trying to increase the rent on its properties by calling for fresh tenders or going in for fresh rent agreements of its properties mainly in Karataka, Tamil Nadu and Andhra Pradesh.
The matha has vast properties in Bangalore, Mysore, Sosale, Kumbakonam, Tricy, Tirupathi and othe rplaces. The matha is trying to ensure that it gets rentals out of  these properties. In some cases, the rentals have been inscreased and in several other cases the rentals are in the process of being increased.
Centuries ago, the Vyasaraja matha was considered to among the richest not only in Karnataka but in India too. The matha and its prosperity reached its peak during the Vijayanagar period when Vyasa Raja was the perceptor to not only Krishna Deva Raya but five other Vijayanagar Kings. During that time, it was not only the Vijayanagar Emperors but also the Muslim Kings of Bijapur, also called the Adilshahis, and Bahlol Lodh of Delhi among others who honoured Vyasa Raja and gifted him with an umbrela and jewels.
Vyasa Raja never kept any wealth with himself. When he was honoured with Ratnabhiskeha by Krishnadeva Raya, he distributed almost all of the gold, jewels and ornaments to the gathering of pandits, seers and religious men and the rest to the people.
The matha is once again trying to harness its exisitng properties so as to ensure that it gets the maximum income. The expense sheet published above will indicate how teh matha is trying to revive and reinvent itself.
All the matter contained here have been sourced from the Administrator and the officials of the Administrator's team. We just like to bring to the readers of the post the good deeds of the team.
Posted by Samyuktha Harshitha at 08:59

Samyuktha Harshitha
This is a post on Madhwa religion, philosophy, saints and their works. There is also a blog on Bangalore and Raghavendra Swamy.

Welcome. This is a new blog on Madhwa saints, personalities, religion, philosophy, travel and history. There is also a blog on Bangalore. Take a peek into it. The blog is called Suttha Muttha. It is available at ramubangalore.blogspot.com‎

A new blog exclusively devoted to Raghavendra Swamy is available both on blogger and wordpress.

Samyuktha Harshitha
Bangalore, Karnataka, India
This is a post on Madhwa religion, philosophy, saints and their works. There is also a blog on Bangalore and Raghavendra Swamy.